Is it a premonition of what we will see when the Museum of Modern Art reinstalls its massive collection later this year?

The Long Run, on display through May 5, is an epic recasting of the galleries normally used to display contemporary and recent the most recent chronology of Modernist works. MoMA’s curators disrupted the chronology by pulling unseen works from storage and using them to show what artists with relatively long careers (think O’Keeffe, Rosenquist, Stella) were producing later in life. 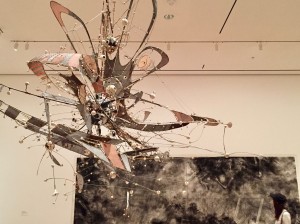 The beauty of the show is that MoMA has mixed famous with not-so-famous geniuses and selected works that exemplify how artists switched it up mid- to late-career. 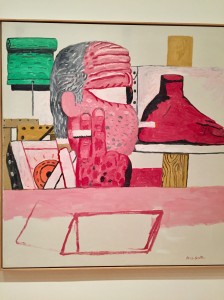 It seems that many successful artists feel compelled to take a new tack somewhere along the line. They just rethink their desire to crank out the same old thing.

Most visitors are confounded by the Fischli & Weiss installation.  Many wonder whether it is a place inside the museum that’s under construction, because it appears to be scattered plaster buckets and paint pans. It’s actually a witty “fool the eye” sculpture that the team hand-crafted from polyurethane.

One of the most magical experiences is the Joan Jonas installation with twinkling crystals, sparkling facets, and mystical mountains – a poetic experience reflecting her lifetime of exploration, collaboration, media experimentation, and life work.

If you have the time, watch this video of the seminar about this amazing show and the longevity of the creative drive:

Remember: MoMA will be closed for three months from June 15 to October 21 for the reinstallation of the museum.