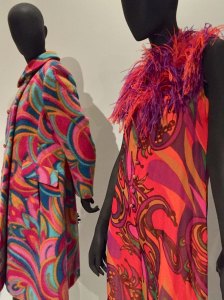 It’s been 45 years since New York fashion leaders entered the “Battle of Versailles” with Paris designers and came out victorious, establishing New York City as the world’s fashion capital.

Although the show only makes passing reference to this epic throwdown, the Museum of the City of New York’s exhibition, Mod New York: Fashion Takes A Trip, on view through April 1, shows Seventh Avenue’s evolution to reach this epic turning point.

MCNY has plucked 70 ensembles (plus accessories) from its costume collection to tell how fashion, pop, and mod moved through the wild, epic decade of the Sixties to the classic ease of the Seventies, mixing in works by influential French designers with our own. See our favorites in the Flickr album. 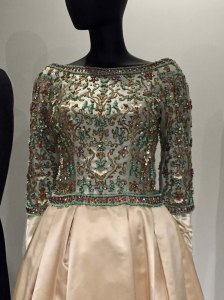 The show’s entrance (outside the gallery) previews the theme of the show and also showcases the vibrant Sixties fashion dolls by Harlem’s Ruby Bailey, which have been lovingly restored by MCNY’s costume collection team.

Inside the main gallery, MCNY features an intriguing timeline of New York City fashion firsts alongside world events and a “Black is Beautiful” wall that provides context for the influence of Uptown style and street fashion throughout the decade.

The gallery show tells the story of how early fashion got a jolt of electricity when Jackie Kennedy stepped into the White House in the early Sixties, sporting cleanly tailored looks by Oleg Cassini and Dior’s Mark Bohan. 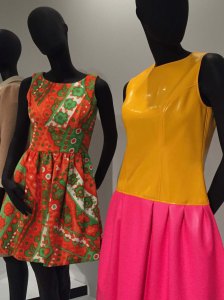 Sleek Givenchy and high-society Audrey-Hepburn ruled, as shown by nearby Vogue spreads from that era. MCNY throws in some of New York’s own – Mollie Parnis dresses, ladylike Beth Levine pumps, and jewelry by Arnold Scaasi that complimented his elegant evening designs for celebrities and first ladies.

Around the corner, there’s a color, fabric, and geometric-shape explosion, with a vibrant “youthquake” display – Mary Quant miniskirts, Courrèges and Cardin space-inspired looks, and the allure of sparkly synthetic and vinyl knee-high boots from 1964 through 1966.

The New York designers featured here include Donald Brooks, Chester Weinberg, Anne Klein, and Geoffrey Beene, along with the electrifying dresses and ensembles created by Deanna Littell and others for Henri Bendel, where Geraldine Stutz created the boutique-within-a-store retail concept and Andy Warhol illustrated shoes.

The Paraphernalia boutique, where Betsey Johnson go her fashion start, gets a nod, too.

Pucci and Bohan are still bringing it from Europe, but Weinberg, Blass, Beene, Betsy Johnson, and the Serendipity boutique are adding their innovations from New York streets and hippie culture.

The show concludes with selections from the Seventies, which reverts back to a less-is-more aesthetic with the advent of supple, slinky Quiana jersey and, as Vogue dubbed it – “the new ease.”

In New York, it was the era of Halston and Stephen Burrows, who created dresses that moved in a disco, and did not distract from the women who wore them. Oscar de la Renta, Anne Klein, and Geoffrey Beene went with them to duke it out in Versailles, and the exuberant, easy nonchalance of the American designers and multiracial models won.

Listen in as stylist Jacqui Stafford and fashion expert Susan Swimmer walk through the show and discuss how the Sixties continue to influence fashion and red carpets today, with comments by the show’s curator, Phyllis Magidson