Tower of keyboards and wires in the center of the fourth-floor gallery; Newton, PlayStation, and iMac visible on the history wall as iPad watches over everything

What’s the longest you ever sat in front of a computer screen or stared at stuff on your phone? Can you even remember a time before there were texts, browsers, and interactive screens? Bard Graduate Center Gallery has assembled a retrospective that asks you to remember your first keyboard, joystick, trackball, and mouse in their exhibition, The Interface Experience: Forty Years of Personal Computing, on view through July 19.

Plus, you can touch everything in the show and even sort through maybe every clamshell and Internet-enabled cellphone ever designed. What a stroll down memory lane!

Your first view of the fourth-floor show is a tangled tower of keyboards and cables, surrounded by a pegboard gallery with little platforms displaying the timeline of devices – desktop PCs, tablets, and game consoles.

The oldest item in the show is the famous (but rarely glimpsed) 1973 Xerox Alto operating system, which the curators display on an ever-playing loop. Experience what Steve Jobs saw when he came face to face with the first graphical user interface, replete with the screen arrow. Brain flash on using a mouse to point to stuff on a screen – Steve said that someday everyone would be using something like this interface.

Walk on to see the Apple IIe (Woz built in an unbelievable 64K of RAM), VisiCalc (first “killer app” all quants had to have – a spreadsheet), and the predecessor to Steve’s Macintosh – the 1981 Xerox Star, which was the first commercially produced computer system to use a mouse and GUI. At a price of $16,000 in 1981, Steve’s up-and-coming Apple Macintosh was positioned to become a winner. 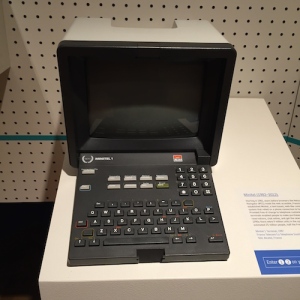 Before web browsers: Rarely seen, the exotic Minitel (1987 model) text information interface, which the French government distributed for free to half its population.

The Commodore 64 and IBM’s PC aren’t neglected, and neither is MS-DOS. Consider other game-changers such as Palm Pilot, Newton, and Kinect. You can touch them all and remember the way it was before things got smaller, faster, and got more oomph. Get a glimpse of the installation (pegboards and all) on our Flickr feed.

Don’t worry if you can’t get up to 86th Street to handle the technology in person. As usual, Bard’s students and faculty, who collaborated on this show, have produced a highly fulfilling web application that highlights everything in their show, adds historic tidbits, and shows each piece’s original print and TV ads.

Click on “Grid” to see all the exhibition items. Click on “Connections” to read interesting comments by the curators comparing different items or telling little histories about the relationships between the tech innovations. Click on “Device Statistics” to see how many units of each sold, how long it was in the market, and how much each would cost in today’s dollars. You’ll be able to sort the items by any of these parameters.

Example: sorted by today’s cost, the most expensive computing investment in the show would be the Xerox Alto operating system at (today) $225,981.

Be sure to click on “more” and enjoy the gallery of magazine ads for these innovations. And check out the 1979 TV commercial for Xerox Alto, on loan from the Xerox Archives, and please, do not miss the unforgettable all singing and dancing MS-DOS product introduction video.

You’ll read memories shared by gallery visitors about various items in the exhibition. For that matter, click on any item on the Grid and add your own story about your first personal encounter with these icons!

Mobile phones for days – the future of computing. The curators put these up with Velcro so visitors could feel them.