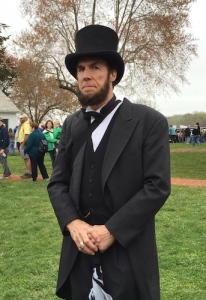 A grammar book, a book of math homework, dark romantic poetry, and required Shakespeare reading could be found in any literate teen’s bookshelf. In this case, they belong to Abraham Lincoln – key items that bring insight to his love of words, literature, and learning in the Morgan Library’s exceptional show, Lincoln Speaks: Words That Transformed a Nation, on view through June 7.

The show begins with Lincoln’s early books and poems, including those inspired by Mr. Poe’s The Raven, and presents drafts, manuscripts, letters, and the occasional photograph in a sequence that follows the trajectory of Mr. Lincoln’s life – campaigner, leader, emancipator, chief, and icon for the ages.

Follow along in the online version of the exhibition here and take a close look at some of the most important writings and objects in the show. 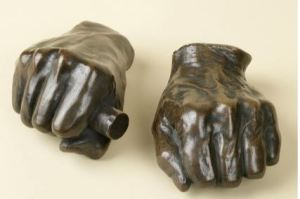 Right Hand of Lincoln, a 1888 painted bronze cast by Leonard Volk, from original cast done in 1860 when Lincoln was nominated for President. Source: NYHS

The visual centerpiece of this unique tribute – a cast of Lincoln’s hands that were eventually scaled up for use in the Lincoln Memorial – is on loan from New-York Historical Society. Among other remarkable items are the Emancipation Proclamation and the first letter he wrote on April 2, 1865 at the fall or Richmond. It was to his wife, Mary, and ironically it would be the last she would receive.

The website and museum installation both feature terrific media and commentary, including an insightful documentary screening in the gallery. 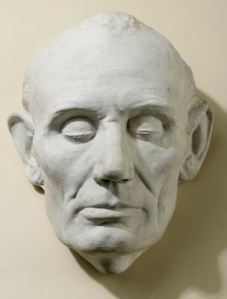 Copy of life cast done by Leonard Volk of LIncoln in 1860. Source: NYHS

The Civil War and the end of slavery are primary topics, of course, but looking at the handwriting, personal notes, and original writing provide significant insight to this monumentally important individual.

Although it’s not related to the exhibition, click here to see Lincoln, Grant, and other reenactors recreating the sights and sounds of the Civil War surrender at the 150th anniversary at Appomattox Court House, Virginia.