When the curators at the Metropolitan Museum of Art were researching collections for last year’s Impressionism-fashion show, they noticed something curious – a disproportionate number of luxurious 19th century American dresses in black. The black silhouettes found in the Costume Institute’s collection formed the basis for their first fall exhibition in seven years, Death Becomes Her: A Century of Mourning Attire, closing this weekend.

The show is a sumptuous walk-through of the years spanning the 1840s to the early 20th century, when fashionable women telegraphed their status as widows, paid tribute to fallen heroes, and acknowledged the passing of a member of the British royal family through dress, hats, parasols, rings, brooches, and other purchases. Click here to see our Flickr feed, and here for the Met’s own gallery views. 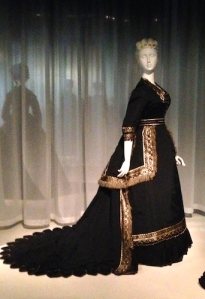 Fashion became such a rich language that the women in the 19th century felt “forced” to conform, according to associate curator Jessica Regan. It was an expensive proposition, and during the hard times of the American Civil War, many women stopped worrying about what others might think if they didn’t conform. If you didn’t have the cash to commission a new frock, it seemed to be OK just to dye an old one black.

Men of the 19th century were essentially wearing all-black suits, so the show’s focus is squarely on the ladies and the complex codes of mourning-attire etiquette. For example, after a sufficient period of time, a woman could introduce a bit of grey into her wardrobe, then mauve.

The team has assembled stunning examples of each from local collections (the now in-house Brooklyn collection, New-York Historical Society, and the Museum of the City of New York) as well as from the V&A’s collection in London. The most dramatic all-black look is the sweeping silk moiré gown from 1861 Britain. Perhaps the most startling is the 1868 a all-black bridal gown designed for a West Virginia bride who chose to pay tribute to fallen Civil War soldiers on her happy day.

Boutiques within department stores catered to mourning clothes buyers. Entire warehouses were filled to the brim with essential accouterments for the correct “look”. By the 1860s, mass-production of fabric increased the accessibility of the raw materials. A few decades later, heavy fabrics fell out of fashion in favor of lighter weight, more flowing options.

The 1890s fashions feature the best from New York department stores, including a mourning dress emblazoned with a bold geometric design.

A conservative black dress worn by Queen Victoria stands in stark contrast to the sparkly mauve gowns worn in tribute to her by Queen Alexandra – exquisite and subtle, but not really subdued. The spotlights emphasize the delicate pizzazz of these French confections.

By 1910, wearing all black became fashionable, decoupling the color from its sorrowful past. The show concludes by noting that World War I essentially brought an end to mourning-attire traditions and fashions in Europe.

Next up at the Costume Institute, Spring 2015: Chinese Whispers: Tales of the East in Art, Film and Fashion. Get out your cheongsams. 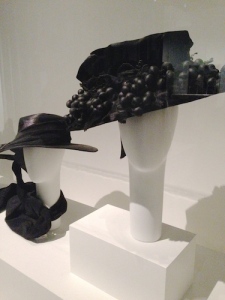 1 thought on “Sending a Message by Dressing in Black”