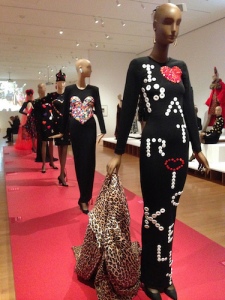 Supermodels having fun, crazy colorful buttons, zingy color, and tongue-in-cheek tributes to fashion’s greats – it’s all on display at the Philadelphia Museum of Art’s tribute to one of our all-time favorite fashion designers in the exhibition Patrick Kelly: Runway of Love, on through December 7.

Click here to see our favorite Flickr photos from the exhibition, which has been packed with fashion admirers throughout the show’s run. The gallery is ablaze with life, references to African-American heritage, supermodel sizzle, and the sheer joy that Patrick took in upending fashion’s icons.

The center runway features lots of Patrick’s iconic button dresses, evoking his grandmother’s way of using mismatched buttons to refresh his well-worn clothes as a kid in Mississippi. As a youngster, Patrick consumed acres of fashion magazines – Vogue and Harpers were his favorites – and high-tailed it to Paris as soon as he could.

He made and sold voluminous coats (inspired by Issey Miyake and Balenciaga) on the streets of Paris to earn cash. But soon his cut-up jersey tube dresses caught the eye of editors of Elle. Maybe it was because he created them for his model-friends to wear on casting calls. When the “tubes” were published, Bergdorf’s placed an order, put his work in their windows, and his career was off and running.

A lot of the excitement was over the models who walked his shows — Pat Cleveland, Iman, L’Wren Scott, and other beauties – who cavorted and flounced all his flirty and fun creations. Watch the trailer and see Patrick and his supermodels in action:

The show features videos of Patrick sporting his familiar denim overalls, a joyful designer with a lot of love in his heart for his models, friends, and colleagues. It’s fitting that the museum has posted on its web the things that he loved best. Click here to see Patrick’s Love List and a photo of Bette Davis wearing one of his looks.

If you can’t get to Philly to see the show, click here to see the museum’s site and work your way through each mini-slideshow. The curator’s copy is attached to each look.

Thanks to Bill T. Jones for lending so many of Patrick’s inspired creations and to the museum’s web team that has created such a terrific documentation of this bright light.

And how does a fashion exhibition like Patrick’s all come together? Here’s a backstage look with the exhibitions team: