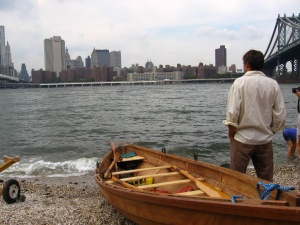 Although we expect great things from Hugh Jackman in the upcoming Schwartz-Sorkin Broadway musical Houdini, Harry’s Vanishing Elephant trick won’t hold a candle to the feat of making Washington and the entire Continental Army disappear from the shores of Brooklyn exactly 236 years ago.

Reenactors assembled this weekend at the pebble beach in Brooklyn Bridge Park to explain exactly how some fishermen from Marblehead, Massachusetts, under the command of General John Glover, accomplished the disappearing act for General Washington, so soon after the Continental Army suffered its first round of defeats from the British. Check out the Flickr feed.

The backstory: The Continental Army was surrounded on three sides and pinned against the East River. While the British Army was recovering from pretty intense of hand-to-hand fighting, it began to rain. Then a thick fog rolled in. Glover and his Massachusetts seamen, undaunted by the weather, had no problem ferrying ammo, muffled equipment, and people all night on August 29, with Washington finally crossing at daybreak. In total, they made 9,000 troops disappear without a sound, all before the British woke up and discovered the escape.

The reenactors who paid us a visit are the same Pennsylvania crew that recreate Washington’s Delaware River crossing each Christmas, and for many it was their first trip to New York. They promise to try to get the “big boats” for next year’s appearance.

Battle Week bonus: Take a peek at Paul Benney’s “Battle of Bergen” performance last night, courtesy of Proteus Gowanus, which had Redcoats and Americans spilling all over the intersection of Smith and Bergen.