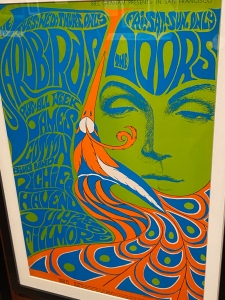 New York City museums are kicking off the first week of the New Year with a look at music and transportation history, far-away places (on Earth and beyond), and artist hang-outs. Find the daily listings for everything on our virtual events page.

Tomorrow afternoon (January 5) there are two fun historical programs: at 4pm, you can take one last look at the New-York Historical Society’s great rock-and-roll extravaganza (which ended yesterday!), Bill Graham and the Rock & Roll Revolution. If you did not get to see the exhibition, don’t miss this … psychedelic posters, the story of the Fillmore East and West, how Bill’s artists got booked for Woodstock, how The Last Waltz concert happened, and lots of photos of the legendary stars he promoted.

The streamlined 1947 lounge car for the 20th Century Limited.

At 5:30pm, you go back a little further in time. Join New York Transit Museum educator Joe Hartman to hear the incredible story of the legendary 20th Century Limited luxury train that ferried celebrities between New York’s Grand Central and Chicago’s LaSalle Street Station in high style for decades. Learn all about how red-carpet obsessions were born.

On Wednesday (January 6) at 7pm, hang out with a few hundred science geeks at the monthly SciCafe at the American Museum of Natural History. This month’s topic is Arctic Dragonflies with museum curator Jessica Ware, who will explain how these little guys keep from freezing. The Q&A is always fascinating with this group, so stick around for that part of the program, too! 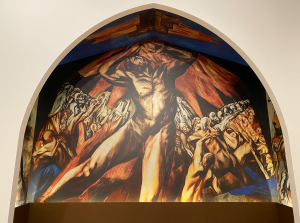 Reproduction of Orozco’s 1930 Prometheus mural at The Whitney

On Thursday, (January 7), delve into great art: at Noon, the Whitney presents a look at the three Mexican muralists – Orozco, Rivera, and Siqueiros – whose passion and techniques inspired a generation of socially conscious artists of the Thirties and Forties. Find out more about their work in the United States and hear how Pollack, Benton, Noguchi, Lawrence, and many others learned at the feet of the masters in this talk about the blockbuster Vida Americana exhibition. 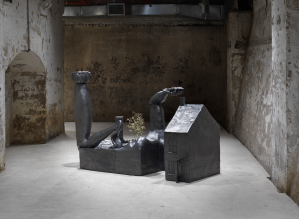 At 7pm, take a trip to the Sculpture Center to meet Jesse Wine, see highlights of his solo show in Long Island City, and hear about his past work and inspirations.

Many more programs are on the schedule, so register for as many of the topics and events that you can fit into your schedule. Many of the events are free, but it’s always nice to add a thank-you donation.