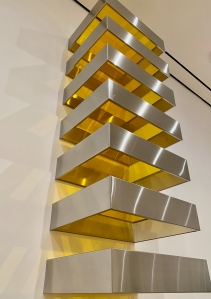 For anyone lamenting the disappearance of the Monolith and yearning to experience its minimalist magic, walk through MoMA’s Donald Judd retrospective before January 3 to understand how big, gleaming, super-sleek objects create such electrifying force fields.

Initially, journalists speculated that the Utah Monolith was the work of West Coast artist John McCracken. It wasn’t, but Judd was one of McCracken’s art-world heroes – a master who reveled in pure shape, pure color, and (when he wanted to) pure transparency. Judd also built repeating rectangles (seemingly not created by human hands) in remote western landscapes (Marpha, Texas).

In the first room, you’ll see cadmium-red shapes from the early Sixties that Judd made in his Soho studio. The idea was to remove any gestures or evidence of craft in the work – just present the pure painted shape.

But to get the perfection he craved, Judd went one step further – engaging industrial fabricators to create large-scale works from his meticulous drawings. Industrial materials like aluminum, iron, and Plexiglass are transformed into magical rectangles, epic towers, and airy channels. See our favorites in our Flickr album.

In each gallery, visitors are invited to circumnavigate and explore the monumental works. One orange box seems to glow; another has a transparent surface that lets you peer inside. An enticing series of blue and silver boxes seem to let you peek through to an entirely different dimension.

Towers emerge from walls in each room – neat stacks of monumental rectangles, separated by exact amounts of space. It’s quite a sensation to approach one, look up, and feel its commanding presence. One silver tower seems to be emitting yellow light. A copper tower gleams a little from a subtle spotlight.

Judd wanted it this way – no interpretation. Just you and the large, beautiful, perfect form, as this short video demonstrates:

MoMA cautions visitors to remain at least six feet away from each of the works, but most admirers are cautious and reverent, taking it all in and giving everything its space.

Here, curator Ann Temkin talks about Judd’s work and the joy of bringing such a monumental exhibition to New York:

Take a trip through the installation on MoMA’s website here, and hear artists describe their experience of the show here.