Although the Metropolitan Museum’s 150th anniversary year did not go as planned during the months-long shutdown of 2020, there’s a silver lining that you can experience for yourself – sixty important promised gifts to honor the occasion in Photography’s Last Century: The Ann Tenenbaum and Thomas H. Lee Collection, on view at Fifth Avenue through November 30 and available for viewing in the Met’s online gallery.

If you go in person, there’s lots of space to wander, relax, and look through three large galleries. It’s a who’s who of 20th century photography – everyone from Stieglitz, Weston, Atget, and Arbus to more contemporary photographers like Cindy Sherman, Nan Goldin, and collaborators Fischli & Weiss.

One of Nan Goldin’s earliest photographs, a 1973 study of her performer friend Ivy strolling home from a drag bar

The show isn’t hung chronologically, but that works to the exhibition’s advantage.  You’ll required to approach each piece more or less like the collectors did – meeting each image on its own terms and enjoying what you see.

Each work is accompanied by a short text that puts the photographer into the context of art history and explains how this particular work relates to the artist’s best-known work. Read each one on the Met’s website.

Often, Ann Tenenbaum and Thomas H. Lee collected work from the start of an artist’s career, or an image that’s goes against the grain of what we’ve come to expect – Avedon’s early work, Mapplethorpe’s ocean image of the aircraft carrier Midway, and Andy’s first foray into a photo booth for magazine piece on emerging New York artists for Harper’s Bazaar. 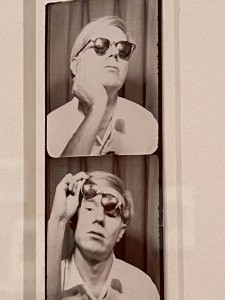 It’s almost as if you are walking through the last 100 years of photography with the collectors themselves, understanding why they collected certain works and the reason that this is such a phenomenal addition to the Met’s holdings.

Tenenbaum and Lee also paid attention to filling out the ranks of less-well-known female photographers, such as Florence Henri who studied at the Bauhaus, Ilse Bing, Bunny Yeager, and New York’s own Mickalene Thomas.

The collectors are also providing the Met with attention-grabbing, large-scale works that show that artists are still experimenting with this art form.

Met visitors were taking selfies in front of the gigantic digitally manipulated print by Andreas Gursky that uses a Prada in-store display as its jumping-off point. Visitors were also stopped in their tracks by Daisuke Yokota’s colorful abstraction so big and spectacular that it had to be mounted in the hallway! Avoiding even a camera or lens, Daisuke just manipulated the layers of pigment.

The exhibition is a loving tribute to these collectors’ passion for artists and image making.

Enjoy some of the highlights with the Met’s curator of photography, Jeff Rosenheim: