“Adulthood,” from Group IV, the Ten Largest on stages of life,  developed in 1907 via mystical revelations during sceances.

Over a decade before Kandinsky and Malevich discovered the transcendence of non-objective painting, a spiritual thinker in Sweden was creating hundreds of giant abstract canvases, automatic drawings inspired by biomorphic shapes, and a series of squares that predated Albers by half a century.

Hilma af Klint: Paintings for the Future, the Guggenheim’s surprise blockbuster running through April 23, introduced the world to the glorious visions of a woman who believed that spirits were guiding her to create a temple laden with images that explored transcendentalism.

Armed with the best painterly education, Hilma soon abandoned her impressionist landscape leanings of the 1880s and by 1906, dedicated her life to channeling spiritual thought through references to biology, evolution, planetary discoveries, radio waves, and other scientific forms that were invisible to the eye. 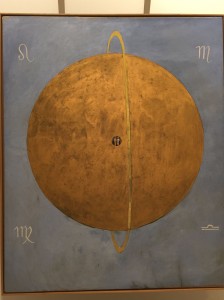 She began by creating large works representing big thoughts that she claimed were channeled to her by spirits via seances, but later developed a more personal style.

Take a look at Hilma’s work on our Flickr album. And listen to the audio tour of the show here.

And hear what the Guggenheim has to say about this remarkable, innovative, and otherwise unknown painter: