To celebrate the anniversary of the United States, the New York Historical Society hosted the reenactors of the 3rd New Jersey Regiment of the Continental Army for a little show-and-tell about the private lives of the people who enlisted in the Revolution. Dressed in colonial garb, the men and women of the Third showed what the enlisted men were given as rations, how they cooked it, and what they carried into battle – beans, hard tack, and (maybe) tobacco to barter.

A small tent and campfire cooking pot were set up just feet away from portraits of Revolutionary heroes and the remnants of the statue of King George III that the citizens of New York had torn down by their African-American slaves moments after the Declaration of Independence was read to Washington’s troops in lower Manhattan on July 9, 1776. All that remains here is half the horse’s tail. 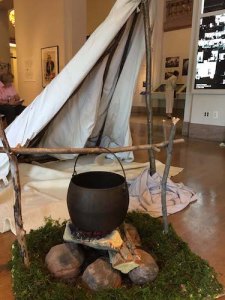 A Revolutionary soldier’s home and kitchen during maneuvers

At a nearby table, men and women of the Third showed how the soldiers made their own bullets and cartidges, and the range of apparatus to keep the hand-made ammunition dry — leather pouches and tin boxes. As far as supplies, muskets, and gun powder went, you were on your own during the 1776 skirmishes.

See it all close up in our Flickr album.

The show includes his inventory of books, crops, slaves, and letters – personal papers that he willed to his granddaughter and her husband, who lived in Massachusetts and eventually gave them to the historical society there.

The curators have displayed his architectural drawings of various iterations of Monticello, domed residences (never built) for friends, plans to improve the state capitol at Williamsburg (never built because the capitol was moved to Richmond), and an early plan for his summer residence at Poplar Forest (octagonal living room before he went all the way with a fully octagonal building with dramatic skylight).

Given the popularity of Hamilton, the gallery includes a copy of an 1801 letter to his granddaughter with an interesting postscript – a note telling her that Hamilton was doing everything in his power during the neck-and-neck presidential race between Jefferson and Burr to ensure Jefferson’s victory. We all know how that turned out from history and the plot arc of the show.

A nice touch of this small installation is the inclusion of Houdon’s famous 1789 portrait bust of 46-year-old Jefferson, which his granddaughter though made him look far too old. It’s a plaster copy of the marble original, and is positioned next to Jefferson’s own handwritten copy of the original, unedited Declaration of Independence (before the Continental Congress removed the part about slavery). 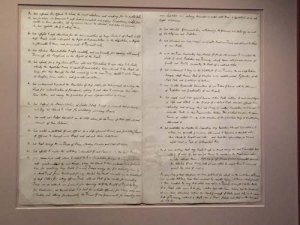 The paper next to it is an even bigger surprise – a hand-written copy of Tom’s original grievances by John Adams, who was on the Declaration committee with Jefferson and Franklin. Apparently, during the hot summer of 1776 while Jefferson was toiling away putting the finishing touches on his masterpiece, Adams wrote out his own copy with which he could lobby the various state representatives in the days leading up to the controversial ratification.

Understandably, this copy from the Adams Family Archive also makes its home at the Massachusetts Historical Society, and here in New York visitors get to see it side-by-side with the version written by the Declaration’s original author.