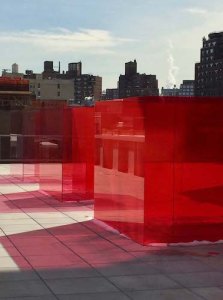 Moving into a new home often gives a new perspective on life, and it’s true of this year’s Whitney Biennial. The open, flexible spaces allowed significantly more creativity above the High Line than at the old confines of the Madison Avenue building — Larry Bell’s 2017 “Pacific Red II” installation lording it over The Standard, Asad Raza’s 26-tree installation with the skyline beyond, Cauleen Smith’s banners in the daylight downstairs, and light streaming through the faux “stained glass” window by Raul de Nieves.

Yes, interior spaces are filled with concept art, video installations, slide shows, and paintings, but the glimpses of light and sky serve like punctuation breaks from the sometimes-intense experiences about race, society, rising personal debt (even for artists!), and a throw-away cuture. 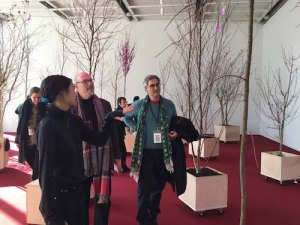 The word on the street is that this is one of the most enjoyable Biennials in the show’s history, which is not to say that the curators have avoided challenging work. They haven’t.

Tension…disorientation…protest are all there in reflections on today’s social issues, censorship, social memory, marginalization of populations, and obsessions over the role that too-much-digitalization plays in our hectic lives.

But there are aspirational pieces, too – hopefulness, sincerity, and healing. 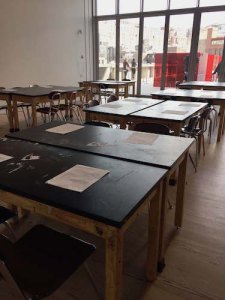 Classroom inside the Whitney by Chemi Rosado-Seijo

Think about the (concept art) school set up inside the Whitney. It’s the idea of Puerto Rican artist and educator Chemi Rosado-Seijo, who tried the same displacement between school and museum in his hometown – an experiment that the kids there are still talking about. For the Biennial, Chemi arranged for Lower Manhattan Arts Academy high school students come to the Whitney for classes one day a week; in exchange, work by Whitney artists is moved to the school.

Take a look at our Flickr album, which includes photos of Chemi and some of the other artists from the press preview.

The Whitney has done a spectacular job of documenting all the artists, their statements, and work on their website.

The museum has produced a beautiful testament to this year’s survey. Take a look and witness art history. Seventy-eight years and going strong: