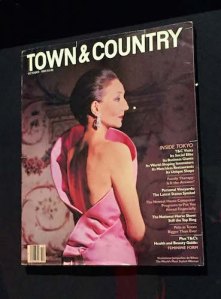 Does anyone want to be elegant anymore? If so, the exhibition about best-dressed-woman-in-the-word, Jacqueline de Ribes: The Art of Style featured at the Metropolitan Museum of Art through February 21, is the place to take an immersion course.

As curator Harold Koda noted, even though the garments in the show span several decades, it’s a little difficult to pin any one of them on a specific decade. Jacqueline was all about perfect elegance and creative expression – not just style for style’s sake. Go to our Flickr album to view our favorites from the show and click through the Met’s gallery slideshow.

Although she was photographed incessantly throughout the Sixties, Seventies, and Eighties, Jacqueline was not just a patron of the couture – she was a hands-on designer and style partner to haughtiest of the haute couture. 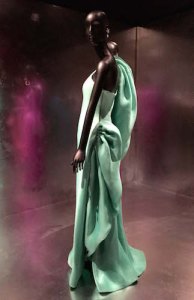 Her timeless 1988 design looks good from every angle

We’re talking about the likes of Yves Saint Laurent, Marc Bohan, and countless other designers at the top of their game. If Jacqueline wanted one of their dresses, they expected that she would make suggestions to enhance their creation. What about changing those sleeves? Moving that bow? Making it a little more dramatic?

And she wasn’t above a good copy, either. If Jackie O wore something that was truly spectacular, Jacqueline might have Cassini do one for her, too. Duplicates? No problem.

When Yves Saint Laurent announced that he was retiring, she put in an order for multiples of the same stunning dress in different colors.

Knowing one’s limits is important. When she was just starting out, she knew she was great at dramatic conceptions, but terrible at sketching. 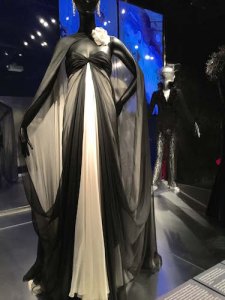 It was her good fortune that she got a recommendation to hire a sketch artist that some older designers thought might work with her to illustrate some of her ideas. His name was Valentino, and he turned out to be a lifelong friend and eventual supplier of some of the best red eveningwear the world has ever seen.

When she began her own dress line, she didn’t rely upon family money. She traveled to New York and raised it herself, like any other up-and-coming designer. The galleries are filled with her own work, which hold up spectacularly well next to the giants of Paris fashion. The Costume Institute genuinely loves her look, style, fabrications, and full-out drama.

Moving through the different galleries of the show, it was clear that Jacqueline chose and designed clothes that looked great from any angle. No wonder someone called her a “living fashion drawing.” In the white-and-black section, there are several stunning creations where the dress fabric is brought up toward the shoulder in a flowing, elegant, dramatic sweep. 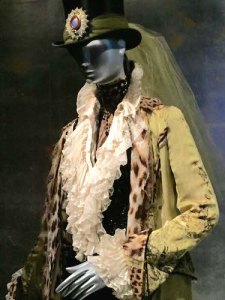 Her mix and match Lady Corsaire look with vintage, Cavalli, and Ralph Lauren

In the slide walls, she’s often shown working in jeans behind the scenes to bring a fashion show and collection to life. Although the focus is on eveningwear, there are marvelous mix-and-match get-ups where her love of vintage, ready-to-wear, and one-of-a-kind layering really shows.

It’s a joy to see how she refashioned her Laroche couture coat into masked-ball Mongolian princess costume and to see her mixing separates from the Express or Cache with turn-of-the-century tophats and Cavalli stuff. Yes, she spent a fortune on clothes, but also shows everyone how to cobble runway-ready looks from easily accessible parts if you have loads of creativity and style. 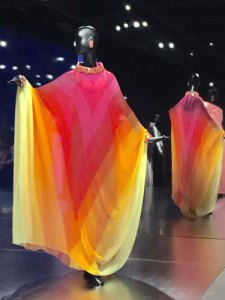