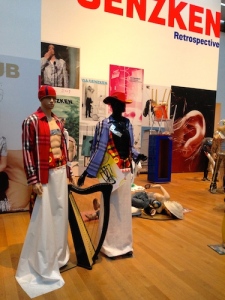 Early in her art career, she zigged and zagged and eventually found inspiration in New York, but  then who hasn’t? Take a ride at MoMA through the career of an “artist’s artist”, Isa Genzken Retrospective, through March 10.

On a weekend with the bit-of-everything Biennial debut, why not also see work a sculptor who’s done it all herself — tried a little bit of everything on a career-long journey through computerized wood, concrete and electronics, resin, subversive architectural models with ready-mades, and mannequin-and-outfit art. Hey, she’s a one-woman Armory Show!

We have highlights on our Flickr feed, but MoMA’s digital interactive team has done an outstanding chronology of this Berlin artist’s invention over the past 40 years. Click through the show on the web, read the label copy, and enjoy the audio tour. 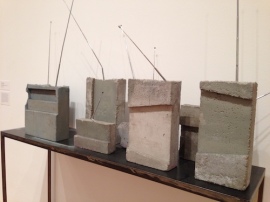 What we found interesting: Back in the late 1970s, she wondered what it would be like to design sculptures on computers and ended up making huge wooden sculptures that took collaboration with physicists and carpenters. To put her achievement in perspective, her 1980 sculptures were displayed at a time when the Mac was still essentially a garage project. Good going, girl!

Around the same time, she became captivated by electronics and began experimenting with collages, sculptures, and ready-mades with hi-fi equipment and wideband radio receivers.

Fenster (Window) (1992) installed under a MoMA skylight from which you can see the buildings outside.

MoMA’s installed a spectacular gallery populated with large, high, dramatic, airy structures that she made in the 1990s. Are they windows? Empty stretchers for paintings? Look closely and you’ll see that they are made of see-through resin. It’s all the more mysterious because their tops are reaching up to Midtown’s rectangle skyscrapers visible through MoMA’s own window. (You’ll feel like you’re in Stacy and Clinton’s 360, except it’s reflecting Modern architecture.)

It’s a nice gateway to what lies beyond – a room filled with work inspired by her first trips to New York in 1995-1996. She loved what she saw.  She collected mementos of her Downtown travels – invites to clubs, flyers, posters, gallery notices, calling cards – and made them into bright, colorful scrapbooks.

In 2000, she went on another collecting trip from her flat near Wall Street to pay tribute to the City’s world-class skyscraper architecture that so inspired her. 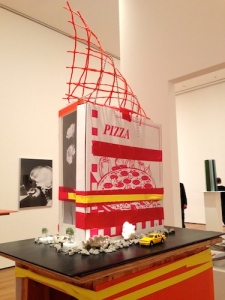 But rather than rely on “substantial” materials to interpret hard-edge Modernist design, she cobbled together vignettes of toy cars, pizza boxes, and other ready-mades holding it all together with brightly colored adhesive tape. (As you walk through her tall plywood stands perusing her cityscapes, watch out for the tiny Hula-Hair-Barbie-wannabe toy standing along the narrow pathway facing the gallery wall.)

And be sure to look up. On the ceiling above, she’s showing a film shot on the noisy city streets, interspersed with tranquil river views of the Hudson.

There’s much more to the exhibit – commentaries on corporate America (featuring Scrooge McDuck) and her phenomenal we-are-all-actors-in-this-crazy-life installation at the entrance. You can’t really describe it.

And don’t worry if you’ve never heard of Isa before, as this MoMA YouTube attests. If you have 20 minutes, take a tour of Berlin, New York, and the Venice Biennale through the eyes of Isa’s fans — Lawrence Weiner, Wolfgang Tilmans, Dan Graham, and a host of German gallery owners, collectors, and curators:

Take a stroll through Isa’s work in person at the Museum of Contemporary Art Chicago (April 12-August 3) and the Dallas Museum of Art (September 14 – January 4).