Challenging, ground-breaking art from all over the world under one roof, fashionable crowds, and buyers looking for the next big thing. On March 6, the 2014 edition of The Armory Show opens at the Hudson Piers 92 and 94; but for art-history lovers, there’s just a few days more to travel back in time to experience the 1913 edition that inspired it all at the New-York Historical Society’s show, The Armory Show at 100: Modern Art and Revolution, closing February 23. Check out the spectacular online exhibition site.

NYHS has gathered together 100 of the great art works that rocked Manhattan 100 years ago downtown at the 69th Regiment Armory on Lexington and 26th Street, where the Fighting Irish rented out their parade hall for a month to the newly formed Association of American Painters and Sculptors to show 1,400 works representing the latest trends in modernism.

One of the many postcards sold at the 1913 show’s merchandise table. Source: Smithsonian Archives of American Art

Picasso, Cezanne, Matisse, Gauguin, and Munch were there in all their shocking glory – the first time many of these Europeans had been shown stateside. Take a look on the NYHS site and see what chaos ensued in the popular press. Even T. Roosevelt himself wrote an editorial about it.

NYHS not only shows us the work, but puts it all in the context of the times – the bohemian life in Greenwich Village, upstart galleries with an interest in the primitive and new, dissatisfaction with the confines of taste at the National Academy, and New York tastemakers yearning to make their mark on a world stage.

In the little low-light gallery next to the library, you’ll find all sorts of interesting ephemera – letters by the organizers of the show, registration cards with the insurance value of now-famous works, postcards for sale at the show, and a scrapbook of satirical telegrams read by the organizers at their celebratory dinner. This is where you can marvel at Gauguins selling for $8,100, Redon for $810, an oil by Braque for $200, a plaster Brancusi for $200, and Cezanne lithographs for $20 to $40. No wonder Stieglitz amassed such a great collection at these prices! 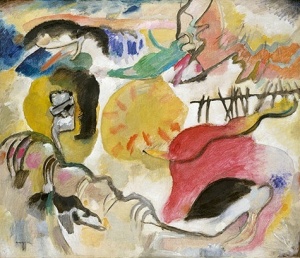 It’s interesting that the show would not have been such an affordable-art extravaganza without mega-dealer Vollard riding to the rescue, shipping crates of color lithographs and drawings to New York from Paris a scant three weeks before the show. Kuhn and his co-organizers devoted three galleries to works on paper. Works by Gaugin, Cezanne, Lautrec, and Munch flew off the walls, and when the show closed in New York, half of all the works sold had been supplied by Vollard.

Check out the price list and who-bought-what online. You can also probe the Smithsonian’s archive of Armory Show-related materials here. 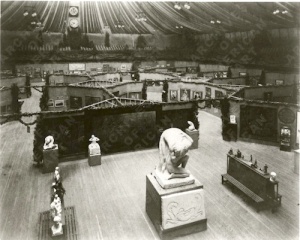 The NYHS show is organized according to the original layout, including the grouping of Cubists with Mr. Duchamp’s iconic Nude Descending a Staircase, and the Fauve-Brancusi area – otherwise known in New York critic circles as the “Chamber of Horrors.” Looking at Matisse’s Blue Nude today, it’s hard to imagine that Art Institute of Chicago students found Matisse so shocking that they held a mock trial for him and burned it in effigy when the show arrived in the Windy City in April 1913.

And speaking of Chicago, the Armory Show was a huge success there – attracting over 180,000 art lovers, nearly double the attendance in New York. See the Art Institute’s gorgeous web site of exactly how everything looked in its grand galleries on Michigan Avenue. Everything really got the royal treatment. In turn, AIC can say it was the first museum in North America to show Picasso, Matisse, Duchamp, and Brancusi. No second-city status there. 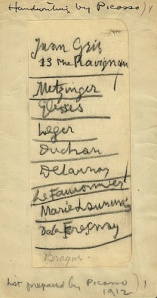 Buy your ticket to this Armory Show before you buy one for the next one and feel what it’s like to walk through a turning point in American art history.

2 thoughts on “The Armory Show: One Ends, One Begins”