Andy is kicking Mr. Munch’s Scream up a notch on Park Avenue, all to the delight of the Queen of Norway, in the Scandinavia House’s stellar exhibition, Munch, Warhol, and the Multiple Image through July 27.

Actually, Queen Sonja herself was one of Andy’s subjects in his Celebrity series, so it’s no wonder that she flew in to preside over Mr. Munch’s 150th birthday at a New York show where his most iconic work is appropriated and reimagined by the Master of Pop.

Andy first encountered Munch’s woodcuts in Oslo in the 1970s, and took home reproductions. So, when a now-defunct 57th Street gallery invited him to their 1982 Munch exhibition and offered him a commission to make 15 paintings and 30 silkscreens about the work, Warhol accepted.

The Scream was so iconic, Andy considered it almost a “ready made”, as ripe as any other pop culture image for his flat, unemotional, Day-Glo serial treatment. Ditto for Munch’s Madonna and Self Portrait with Skeleton Arm. He photographed reproductions of four Munch works, blew them up, traced on them, and rephotographed what he had traced. And then he turned it all over to a master silkscreen printer with suggested colors. So totally Andy. 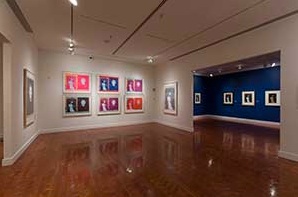 With all the commotion earlier this year at MoMA over The Scream (like fans along the red carpet, jockeying to get their photographs taken with the world’s-most-anxious celebrity-on-a-bridge), this show deserves similar crowds. Because Warhol’s prints were never published, you’re seeing one-of-a-kind prints that are dispersed around the world and rarely on view.

The curators have also brought together (with the help of The Munch Museum in Norway) multiples created by Munch. It’s fascinating to compare the five controversial Madonna prints side by side, walk into the first Warhol gallery, turn around, and see both Munch and Warhol Madonna interpretations right in front of you. It’s a smart, immensely satisfying installation.

You’ll enjoy listening to what the Queen had to say (first 8 minutes of the video) and see photos of her younger self at The Factory with Andy and Mr. Rosenquist.

Oh, and the photo below isn’t a disco queen from Studio 54. It’s Andy’s wall-sized reinterpretation of Munch’s The Brooch, Eva Mudocci, a lithograph originally done in 1903 to celebrate the beautiful, talked-about violinist.

The last 15 minutes of the video features the curator showing the work of the two Modern masters who knew how to leverage print technology and multiples into fame, fortune, and icon status.