The art biography that the paleo community has been waiting for is here – Charles R. Knight: The Artist Who Saw Through Time. It’s about the artist who was the first to take us all into his time machine, back to the time of the cave people, saber-toothed cats, and the Cretaceous through his paintings and murals that we grew up with at the AMNH and Chicago’s Field Museum. 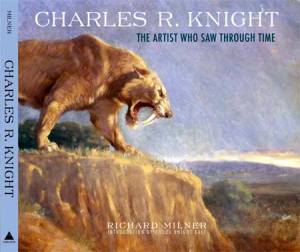 At this month’s New York Paleontological Society meeting, we got to meet his granddaughter Rhoda Knight Kalt and author Richard Milner, who provided stories, recollections, and art works of the 19th-century sculptor and painter. Milner took us back in time, reminding us that Knight (1874-1953) came of age when North America’s mammals (like Bison, which were down to 1,100 in 1889) and birds were being hunted into extinction – a call to arms that stuck with Knight throughout his life, as he painted over 800 species in his lifetime, giving priority to the most endangered first.

In addition to the murals at the AMNH and the numerous paintings gracing the halls, Knight also drew the Bison on the old $10 bill, the sculptures on the Bronx Zoo’s Heads & Horns house, and dinosaurs, dinosaurs, dinosaurs, inspired initially by a three-week visit with Cope.

Milner reminded us that in Knight’s day, there were no museum dioramas or 3-D dinosaur skeleton mounts — just a Brooklyn artist with a classical education with a love of animals and a commission from AMNH to create dramatic, convincing images based upon the boxes of bones in the basement.

P.S. We would be remiss if we didn’t tell you to check out Milner’s Broadway-oriented tribute to the life, times, and philosophy of Charles Darwin at The New York Times video site.